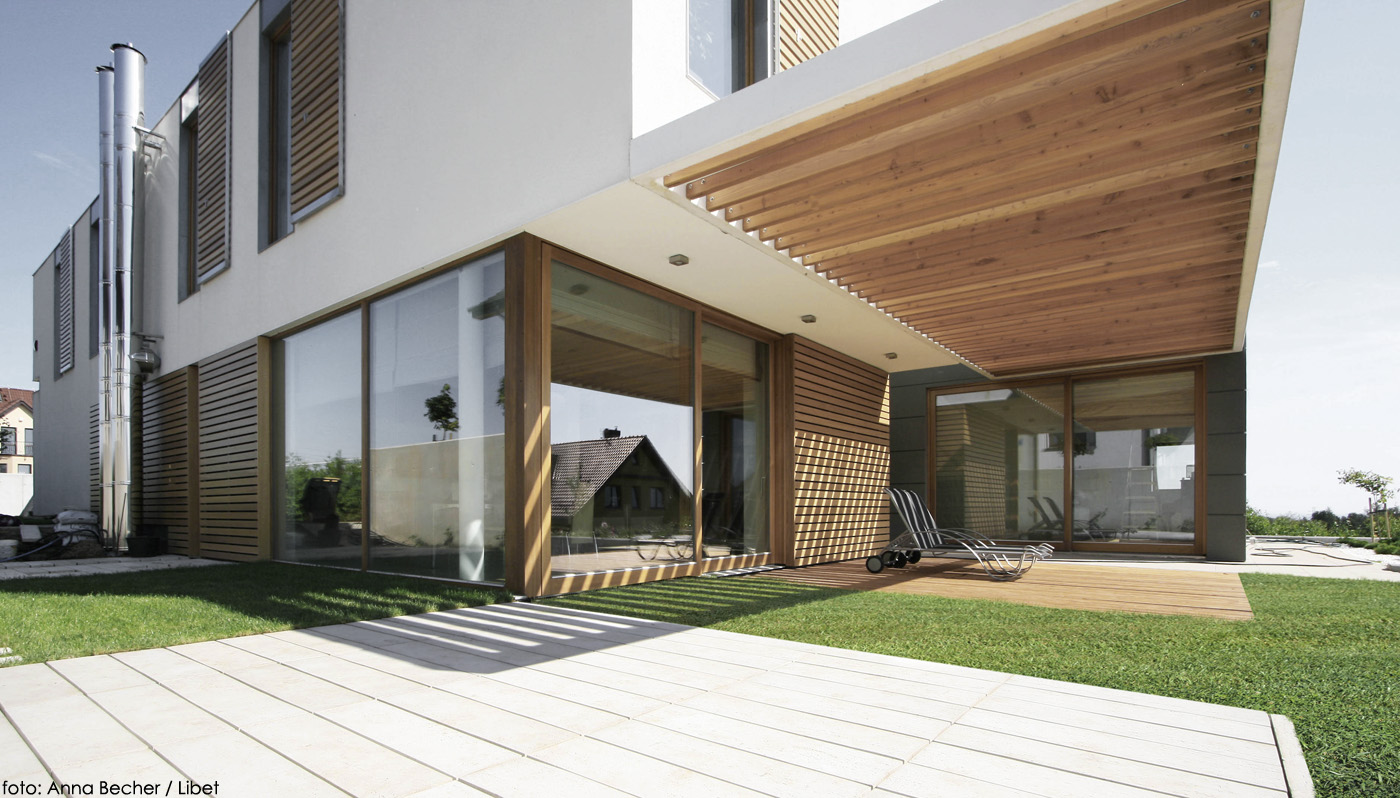 WHY IS THIS FORM?

Comfortable single-family house on the outskirts of Gdańsk. Terms and conditions of development require domination of the gable roof over the building volume. In order to sustain the intimate scale and avoid the extensive proportions, functions were arranged in two zones, placed in the independent volumes. The thing which links them in between is a glazed corridor, tempting the entering users with a great view at its end.
A huge challenge was to maintain a proper proportions of the two preponderant masses, so that they can get into mutual relation. If the upper storey section was placed separately it would be too slender. Lower storey section, for instance, without the upper one- too trivial. Wooden areas on elevations take away the mass of the white part, creating a harmonic comopsition altogether with the arrangement of windows and glazing.

THE MOST DIFFICULT DETAIL IS NO DETAIL

Both forms took on the most simple and synthetic character. Thats why appeared a strong need of keeping away the unnecessary elements, disrupting the abstract concept. The care for the transparent composition determined the further design decisions and showed up in a consequent way of treating the details. In gable elevations the contrast of mass and void is strenghten by the homogenous surface of glazing and balustrade, not ruffled by the joint with flat roof. Smooth, white roof over the bigger mass, with the hidden gutter system, pursues the abstract and monolithic idea.
In the architecture of this level of simplicity, the immaculately designed details take the huge part. The client was  conscious about it as well, so every detail (such as hidden garage door, entrance door, glazing subdivision, windows finishes, terrace shade, openwork shutters and garden arrangement as well) were strictly realised according to the executive project. Thanks to the unique aesthetic consciousness and trust of the investor, this `strangely simple` house could go beyond the frames of concept visualisation and truly apper in real.

WHAT ABOUT THE CONTEXT?

Of course, good architecture should respect the local scenery. However, we do not consider respect for the space background to be the same as the thoughtless copying dominant aesthetic in the close area- especially when its value is questionable. In this specific case, we decided to challenge the incoherent visual language of the neighbourhood. Although this house differ from the ones loacated in close range, it keeps reasonable proportions and restrained scale, fulfilling the requirements of the local site development plan. We believe that our project have contributed to the arise of decent, resnponsible architecture- not colliding with the landscape but arguing with the architecture mediocrity.